skip to main | skip to sidebar

Firstly I must say sorry for being so slack and not keeping my blog up to date. It is like everything in life that snowballs if you don't keep on top of it. The shop and fishing has been so busy in the last month and the blog has been constantly there needing some time.
So, August is when things normally start hotting up for us, and it did. Bob and I decided one day to just use soft plastics and see what happened. We managed 5 bass which at that time was a sound day, as Nelson and the boys had had about the same on the plugs. So we were keen on trying what I would call medium depth lure fishing, in 20ft to 40ft of water. The jigheads we were using were all from 18g to 40g in weight, and the softies themselves were mainly Xlayers, Mother Worms, Sayori Shads and Spindle Worms. I was using the Xlayers in mainly still water, the Mother Worms in deeper water with a more vertical action, and the Sayori Shads and Spindle Worms, with their amazing paddle tails, in say 25ft of faster water and casting them at heads etc. I don't know if that is the correct way to use these selction of lures but it made sense to me.
As we left the harbour there were Terns diving all around us, so we grabbed the rods and had a chuck. There were yachts and boats passing us almost between the pierheads and I am sure they thought we weremad. The sea was alive with pin sandeels and whitebait, so I put on an Original Xlayer and an 11g Carolina Fixe head and had a chuck. These ones mounted below are the French/Silver colour, but I was actually using Wagasaki on the day. 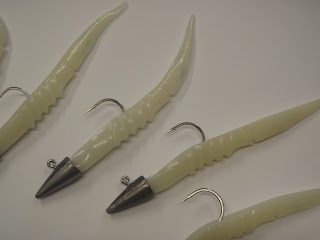 The water was about 20ft deep so I knew the lure would take a while to sink, which is what I wanted. A couple of casts and I feel something having a go as I was rising the Xlayer from the bottom. Blow me down if it wasnt a pretty little Tub Gurnard 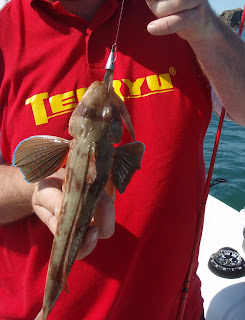 So we gave it a few more casts but soon realised we were just chasing Terns instead of fish, so we moved on. We took the outside route to our fishing spots and saw a nice bit of tide coming over some sunken reef about 10ft below the water with maybe 25ft of water around the reef. Heavier heads were needed and I wanted to get the softy down the sides of the reef were the kelp was swaying in the tide. I selected a Dokuro 30g and a Sayori Shad, as its action is amazing even when reeling with the tide, which is what we were doing. It didnt take lonk and I hooked this little beauty and I don't know if I was more shocked or the bass as it fought like mad for its size. 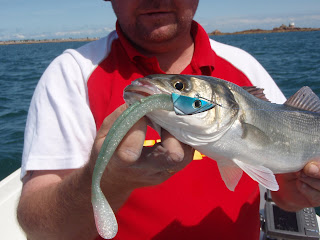 Bob also realised we needed the tails to wiggle with the currant coming towards us so he got out his Spindle Worm, he put on a 25g head and the Shrimp coloured Spindle Worm. Litterally two minutes after I had mine he hooked this one off the end of the reef that I had caught on in the middle. 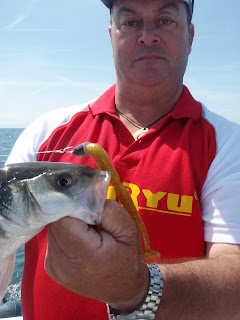 We had a few goes in a few different places, but just hooked a couple of small Pollack and the odd wrasse bit the tails off our lovely softies. Over the slack water it can be a problem if you are not looking for wrasse, dont get me wrong, I love catching Wrasse on softies, but any old softy will catch a Wrasse but they do have a healthy appertite for expensive Japanese ones!
So, off out to the outside again where the tide picks up well before the tide moves inside the reef system. I was casting at heads and keeping the boat back a bit so's hopefully not to spook the bass that may have just turned up on the heads. I put on a chatreuse Spindle Worm with a Xorus Cyber 23g head, these heads when you drop the rod tip will dart the lure from side to side as they sink, its quite a good action in fact and looks very enticing. A few casts on a new head and the Spindle duped another bass. Bob had one on the exact same colour too and we both agreed its a great colour when the sun is shining and the sky is clear. The chatreuse doent look quite as bright in the water as it does out, but so many times now when using plugs on a clear day we do at some point dig out a chatreuse one. 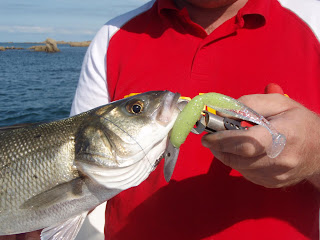 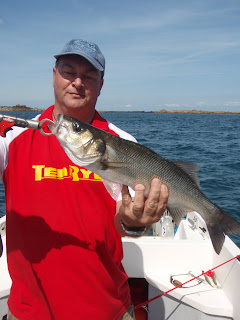 The tide was quite big that day so we didnt have alot of time on the heads we were doing, so with family commitments (I had to pick Sarah up from work!) we headed back. As we aproached the harbour the ferry was leaving so we had to wait a few minutes for it to clear to pier. Not wanting to waste time on the water I grasbbed my rod that still had the chatreuse Spindle Worm on it and had a chuck where we had started and I had hooked that beautiful Tub Gurnard earlier. First cast I only go and hook the best bass of the day, a hard fighting 4lb 8oz'er that really didnt want to come on board. A few photos and she was released, to the hailing of a bunch of Portuguese anglers feathering on the pierhead, they couldnt believe I put it back!! 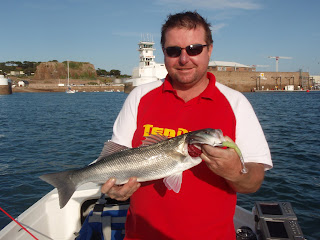 So all in all a good day really, the potential with these modern softies is huge, its a different style of lure angling and requires some amount of patience, but I think the results spek for themselves, as this was the first time we had tried it properly all day in our normal plugging marks.
Posted by mrfishjersey at 9:50 PM