skip to main | skip to sidebar

June was a tough month!

It certainly was a tough month, Bob and me tried all our tricks and we got results, but with the effort we put in we didn't score like we usually do. We had a great start to June with Nick Hewitt getting that superb 7lb'er but that was a one off. We have touched on catching ten bass on one session a couple of times, and to many of you, you will be thinking how can we be moaning, but believe me that is a lot of casts over some of the best looking bass grounds in the world. So what are the reasons? Well, the water has been unbelievably clear, and there seems to be a huge amount of small bass about this year. Last weekend I blanked on the Saturday and Bob managed one small bass of about a pound and a half. On the Sunday I hooked two bass out within minutes of each other, both on a Smith Saruna 110 Ayu, and both were about 2lb. We went about our business for about another hour and then we stumbled across a huge school of bass, I mean it was crazy, there must have been hundreds in the Jap weed below us. We soon started hooking them on surface plugs, Bob on a Zenith Z-Claw and me on a Xorus Patchinko. It was a frenzy for about twenty minutes and we both had about half a dozen out. Whilst retrieving one bass in a saw about thirty bass all around the one I had hooked, and there were some bigger ones below, up to about three and a half to four pound I suppose. Here is Bob holding up two of them on a "Boga" style grip. 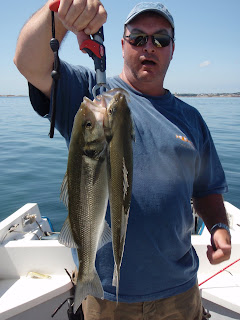 And here they are heading back to their mates at top speed!

It has been the same story for most of the month, we will find a fish or two and then go maybe hours without seeing one and then hit half a dozen in half hour. Now we have been doing this type of fishing for many years now, and patterns are hard to find when the fish are so scarce, but this year with the clear water and abundance of sandeels in our fishing area I do think the fishing is about to explode for us....always the optimist eh!
We had our good friends from Ireland over a few weeks ago, Pat, Cian and Paul had a great time, once again the fishing was tough but we did manage to find a few. Pat reminded me of the magnificence of the Zenith Z-Claw surface lure. It is a lure that I used to love and do very well on, and I not only never use it these days I only had a couple left in my shop for sale!! Dam you Mr Gallagher, an order went in yesterday for 120 of them!! See how no matterhow much a tackle dealer you are you can still be influenced by seeing a few fish caught on a lure!!
Here are some of the exploits the Irish boys got up to that weekend.

From left to right Cian, Nelson and Paul 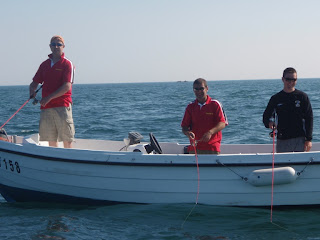 Pat had about half a dozen small bass over the two days, here is his first Jersey bass caught on a Megabass Zonk. 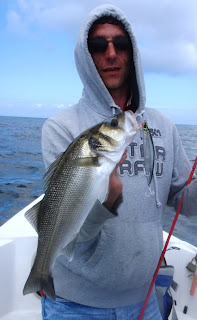 He also had a first over here, a Wrasse on a hear plastic 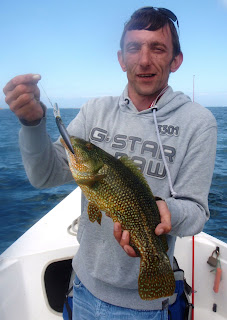 And he had a few beauties on the soft plastics 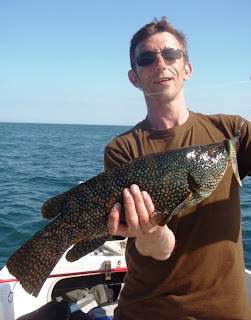 And to show us how its done he only goes and whops out a monster Pollack on a Xorus Rolling Shad. It really went well too, I was convinced it was a Wrasse. Look at its tail, I think a seal or Conger had had a bite out of it at some stage! 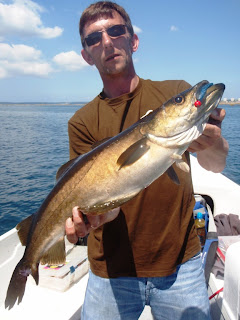 I managed to winkle out a few fish that weekend too, here was my best effort 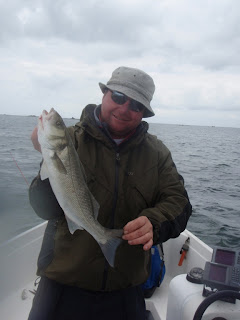 So over the last month we have learnt a few tricks and found some new places and states of tide to fish them, all we need now is some decent bass to tun up and we will be away!
Here are some of the fish we have had in June anyway, Bob with a nice one on a Tackle House Feed Shallow 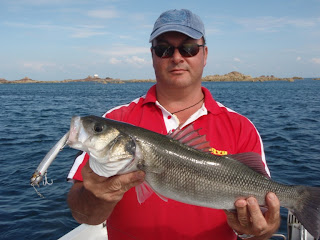 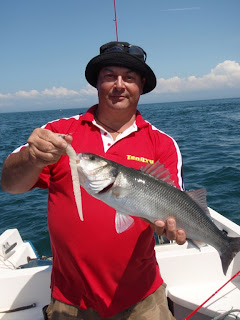 And another for Bob on Hart Absolut Worm
I have managed about twenty bass in June I suppose, this was a spritely one on a Saruna again 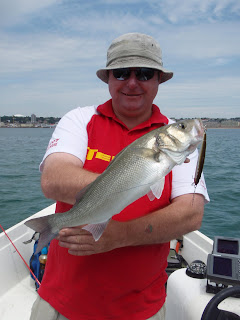 Well roll on July I say, lots to do and lots of fishing. My new webite will be ready very soon, and this blog will be intwinded in it, which means I will be reviewing lures and tackle more and videoing lures swimming etc. I cant wait, I have decided to have some lures on my site that are the modern classics and in my favourite colours, and from time to time, like each month or so, I will get a few different lures and colurs in just as one hits of just a few dozen, and see how people get on, that way there should always be something new on the site to play with.
Posted by mrfishjersey at 11:22 PM 3 comments: